Home - ABOUT US - CASE STUDIES - Domestic Cases - ​Way for the world to hear China's voice: Soundking at the G20 in Hangzhou

​Way for the world to hear China's voice: Soundking at the G20 in Hangzhou

The eleventh summit of the leaders of the G20 was held in Hangzhou, Zhejiang Province, from 4 to 5 September. At the invitation of Chinese President Xi Jinping, leaders of G20 members including US President Barack Obama, Russian President Vladimir Putin, British Prime Minister Theresa May, French President Francois Hollande, German Chancellor Angela Merkel, Japanese Prime Minister Shinzo Abe and South Korean President Park Geun-hye, as well as heads of relevant international organizations such as UN Secretary-General Ban Ki-moon, World Bank President Jim Yong Kim, IMF Managing Director Christine Lagarde and World Trade Organisation Director-General Azevedo, all gathered in Hangzhou for the event. As the premier forum for international economic cooperation and an important mechanism for global economic governance, the G20 has the important mission of addressing economic risks and challenges, promoting world economic growth, improving global economic governance, and enabling all peoples to share the fruits of development, and is committed to building a strong partnership and an open world economy. Since China took over the presidency of the G20 at the end of last year, China has made every effort to actively prepare for the conference and proposed the theme of the summit, "Building an innovative, dynamic and inclusive world economy". 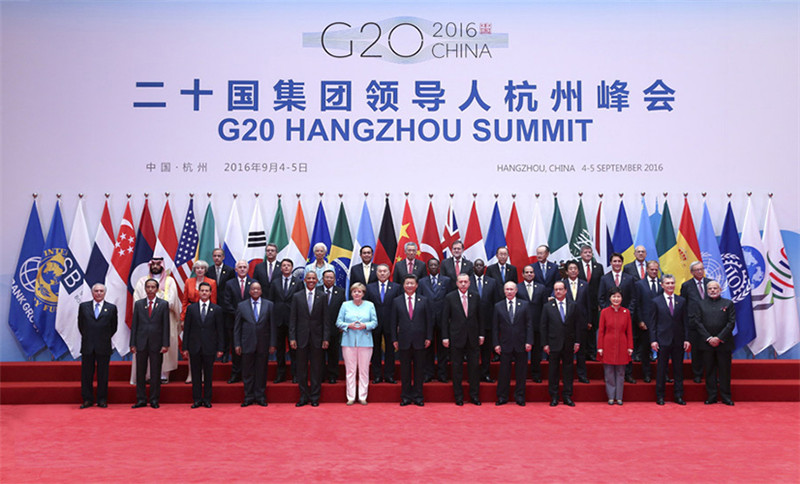 Zhejiang, as the host of the summit, all preparations are prepared with the highest specifications and requirements. As a key enterprise in Zhejiang Province, and having won national honors such as National Enterprise Technology Center, National Key Enterprise of Cultural Export, National High-tech Enterprise and National Postdoctoral Research Station, Soundking Group has the responsibility and obligation to make a contribution to the smooth holding of the summit.

The task of audio reinforcement system of the whole venue was given to Soundking Group, using KLING& FREITAG (K&F) top speakers. The outstanding sound quality, sound pressure, fast installation, stable and reliable, these characteristics make KLING& FREITAG (K&F) extremely widely used, from the Danube symphony to Mississippi jazz, from the shocking rock music to the long rhythmic Beijing opera can be perfectly reproduced. From Olympic venues to high-level conference halls, from music plazas to bars have KLING& FREITAG (K&F) figure. Whether it is the Stuttgart Opera House, Salzburg Mozarteum, Bregenz Lake Stage in Europe, or the Harbin Grand Theatre, Nanjing Poly Grand Theatre, Liaoning Art Center, the large-scale live show "China has a Mao Zedong", "Beacon Three Kingdoms" and other types of large-scale projects in China. KLING&FREITAG (K&F) has become countless listeners dedicated to the passionate music performance, but also for many of the world's largest events to provide a safe and reliable audio security.

After months of on-site debugging and installation, Soundking Group's technical team perfectly ensured the smooth running of the summit. 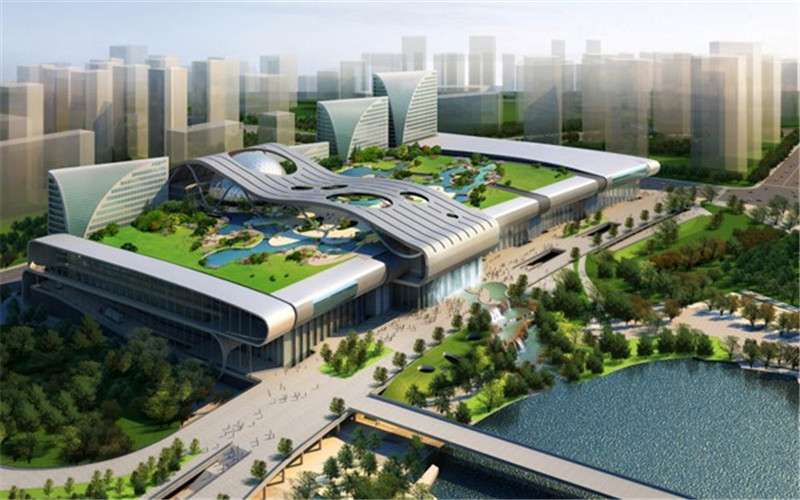 The main venue of the G20 Summit is the newly built Hangzhou International Expo Center, which has a construction area of 850,000 square meters and is the largest single building in China, and the center is used for the G20 Summit in a number of major venues all using the KLING & FREITAG (K & F) loudspeaker system. The 1200㎡ multifunctional conference hall on the first floor is installed with the classic LINE 212-SP active series speakers, which are mostly used in high-end theaters and concert halls, this horn passive 2+1 crossover full-range speakers with FLC® (Frequency Linear Coupling patented technology) whose directivity can be precisely controlled. The system is also used with the SW118E-SP active subwoofer and CA1215 speakers, but also with a set of mobile system is mainly used LINE212-SP active series speakers. 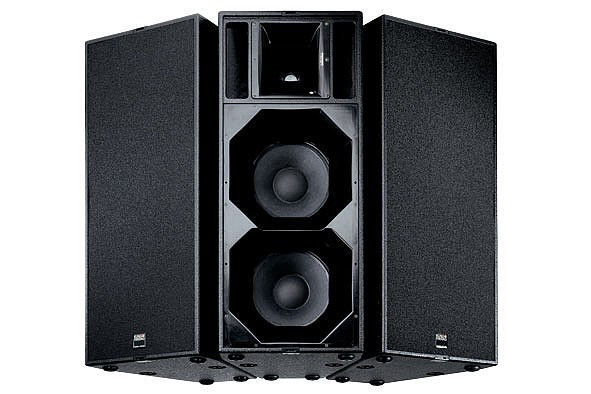 At the same time, in order to more evenly cover the venue, as well as taking into account the possibility that the venue will be divided into two parts for independent use, so the hall also suspended and installed 36 PASSIO series speakers, PASSIO is a new high-performance speakers combined with modular installation system. PASSIO meets the high demands of perfect acoustics, but also offers the most common installation options without sacrificing style. This series of loudspeakers was awarded the German Design Council awarded PASSIO "2014 special nomination" as part of the GDA (German Design Award). The latest original digital network amplifier IPD2400 is used in the system. 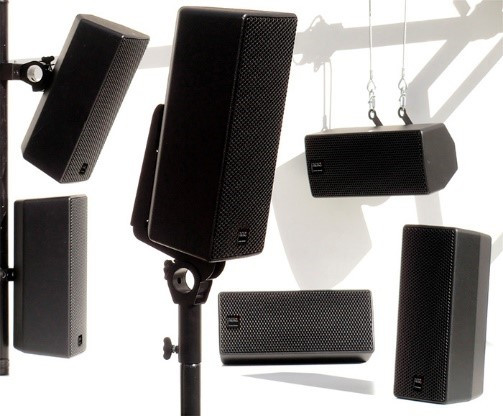 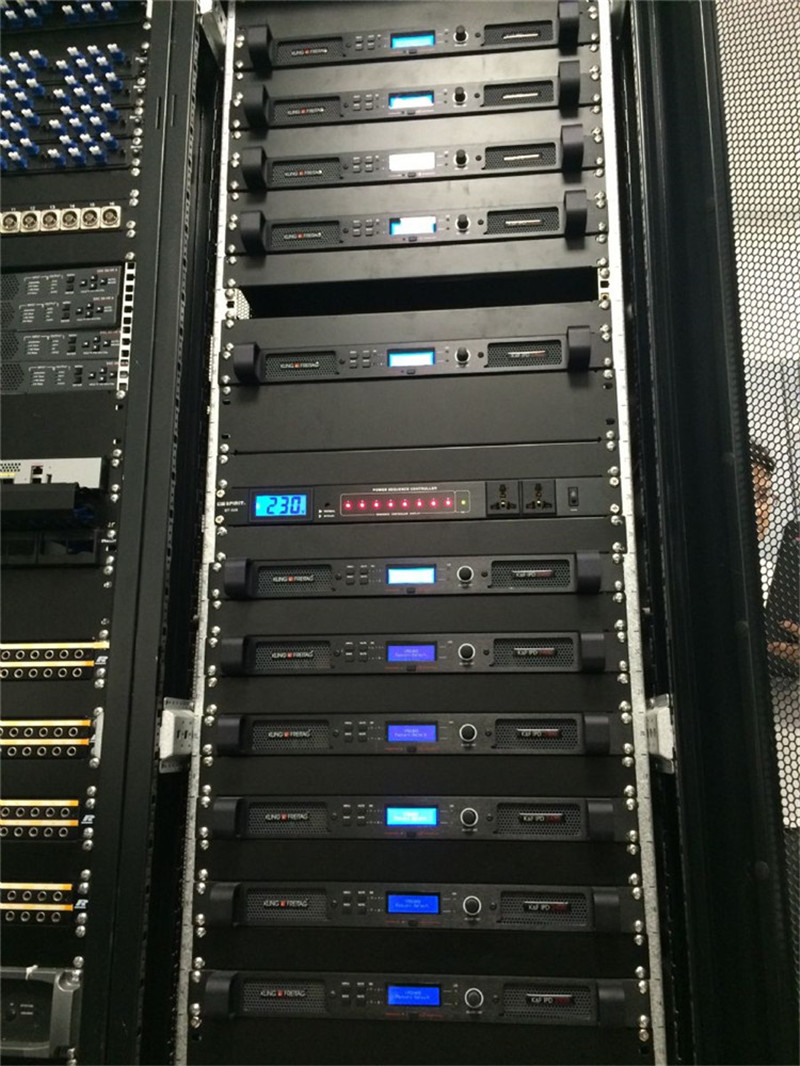 The banquet hall located on the third floor has an area of 3300 square meters, which is the banquet venue of the summit, and the height of the hall is 10 meters. In order to make the venue achieve the best sound effect, the LINE212-SP active series speakers are installed by hanging. The unique Click& Fly®' hanging system of the series can be very convenient for vertical or horizontal hanging installation. The top of the hall is concealed with 36 classic CA 1215 series loudspeakers, so that whether the hall is used normally or divided into two separate meeting rooms, you can get a very even sound field coverage. This hall is also prepared with an active mobile system consisting of LINE212-SP+SW 118E-SP to cope with different meeting and event needs. Another system consisting of LINE212-SP+CA1215 is used in the luncheon hall. 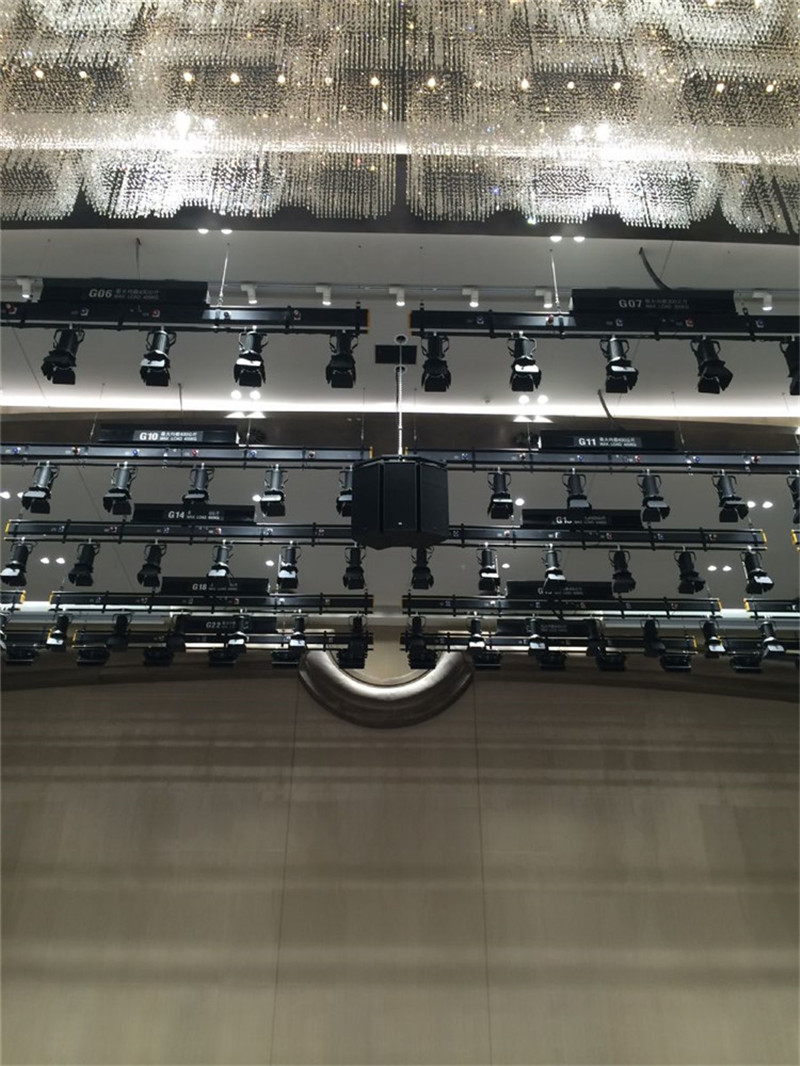 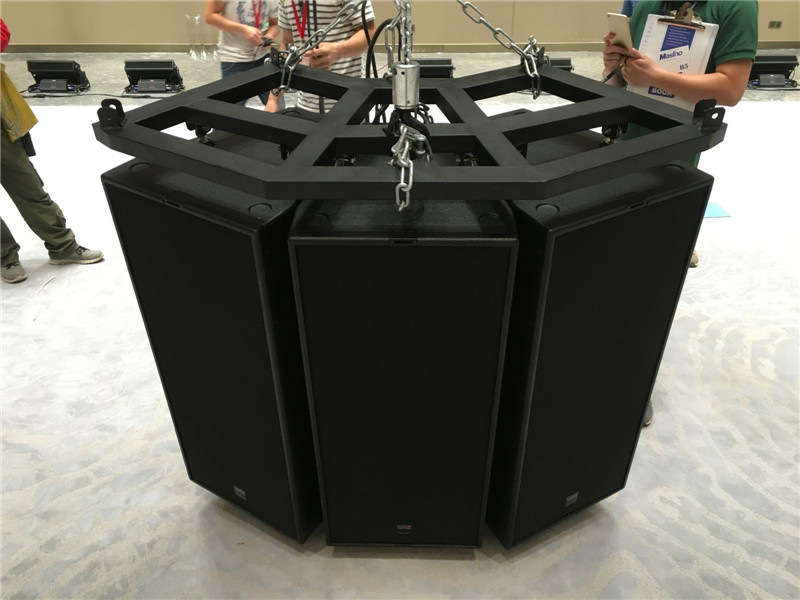 Located on the second floor of the press conference hall covers an area of 1760 square meters, the height of 11 meters, is the main place to release news and summit results to the world during the summit, in order to make such a large volume of the conference hall can have the best sound effect, the scene hanging installed two groups of SEQUENZA10 series line array speakers, each group consists of 8 full-range ultra-compact SEQUENZA10, SEQUENZA10 is the use of FLC® (Frequency Linear Coupling Technology) patented technology waveguide 2-way (2 + 1) full-range line array speakers. The speaker also uses the patented waveformer technology that can achieve accurate coverage and the 'Snap&Fly' technology for easy hanging. Driving the line array is the latest original digital network amplifier PLM10KSE. 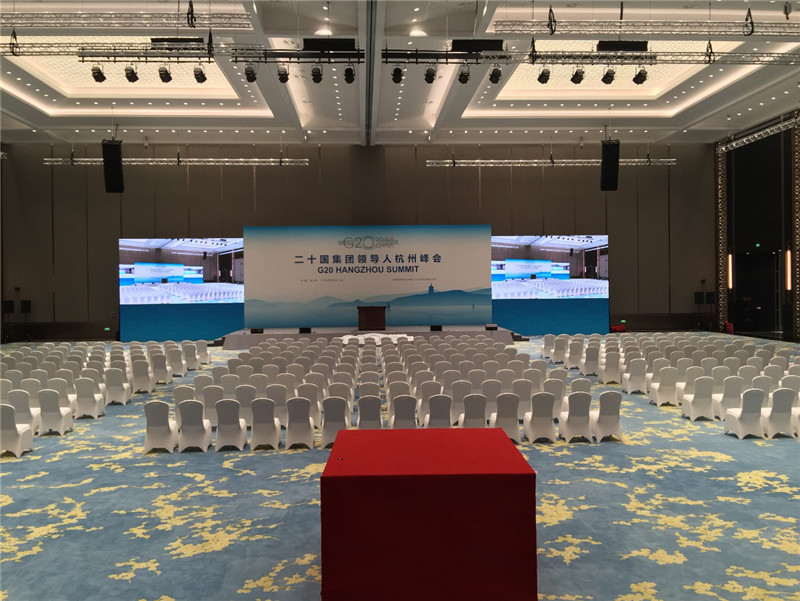 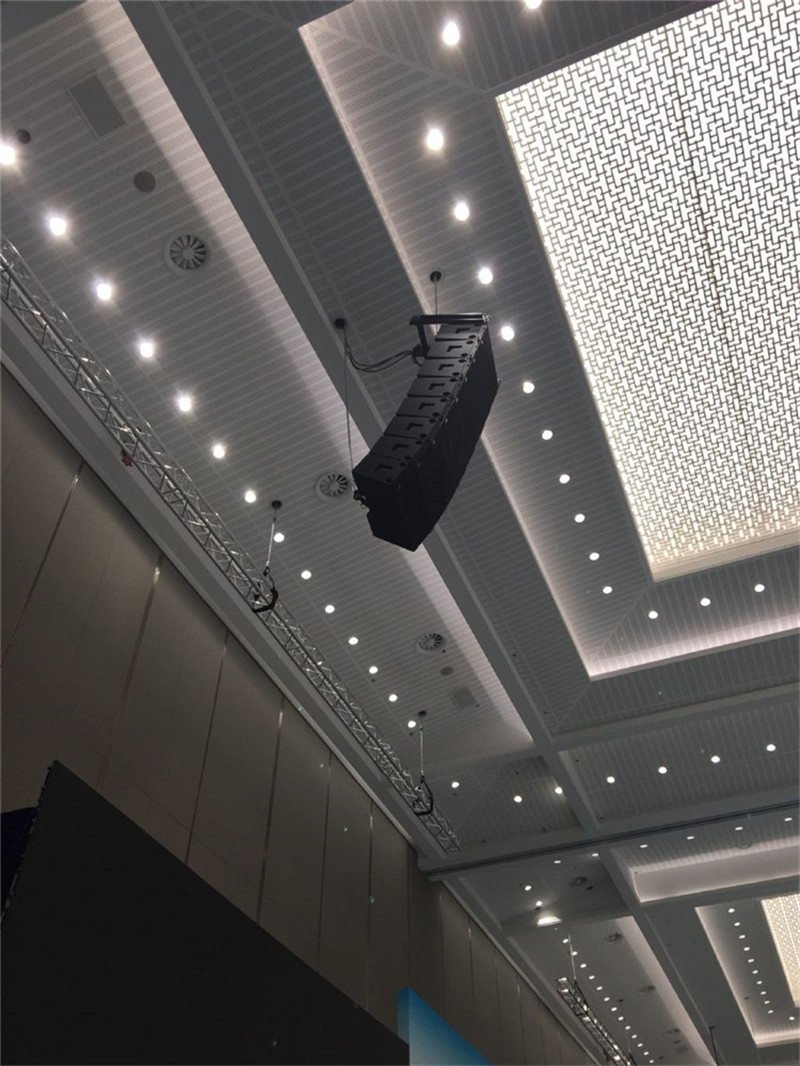 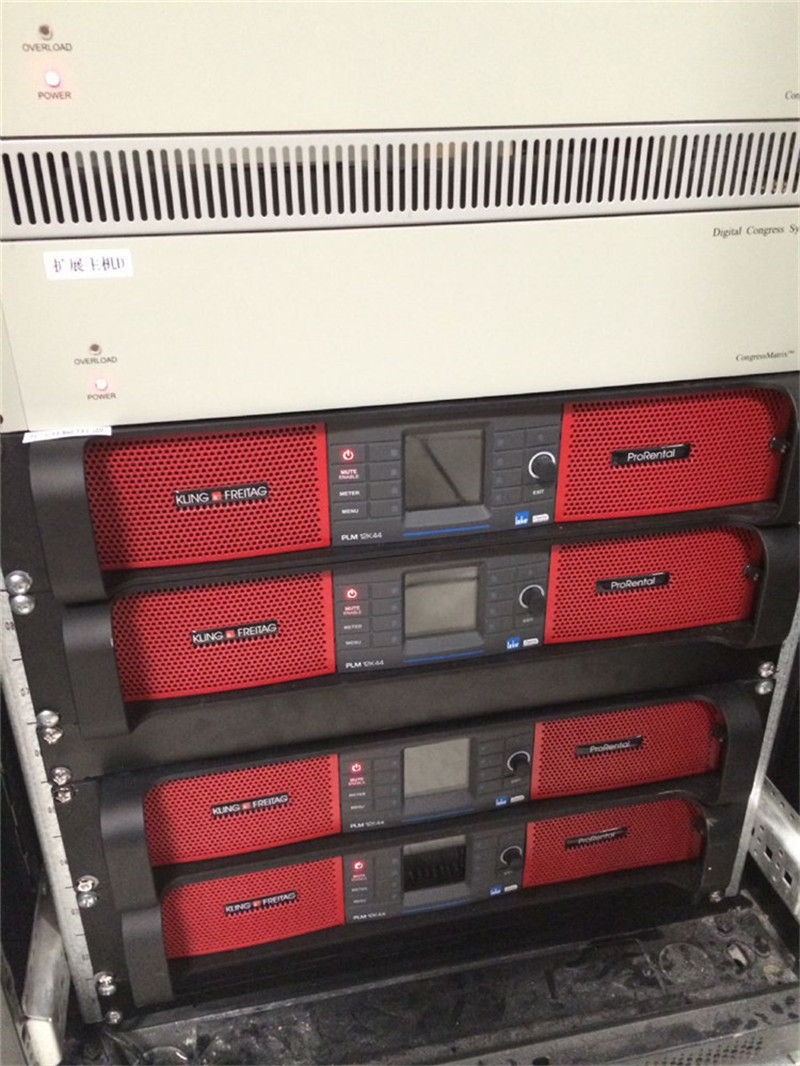 For the same reason of uniform coverage of the sound field, 24 classic CA1001 series speakers are installed on the top of the hall, such a system design has been used in another important international conference: in the 2010 Davos Forum in Dalian (Dalian International Convention Center Grand Ballroom) the same system was well received. At the same time this system is also equipped with LINE212-SP active speaker as a mobile backup system.

In addition to the several large venues mentioned above, the G20 Summit also used many smaller conference halls and VIP rooms at the Hangzhou International Expo Center for a number of individual leaders' meetings, smaller conferences and forums, and for hosting guests. To ensure that these small venues still have excellent sound quality and do not destroy the aesthetics of the décor, another classic series of KLING&FREITAG (K&F) speakers - E90 MKII is installed in the wall. E90MK II is a 2-way passive high-performance sound column speakers, different from the general column speakers. It is not only able to control the sound energy distribution in the vertical direction very precisely, but it is also very suitable for various difficult sound reinforcement spaces because the control of directivity significantly reduces the reflected sound from the ceiling and floor. At the same time, E90MK II also has a high level of sound quality and elegant and sophisticated design, making it the first choice for high-end conference rooms and lecture halls. 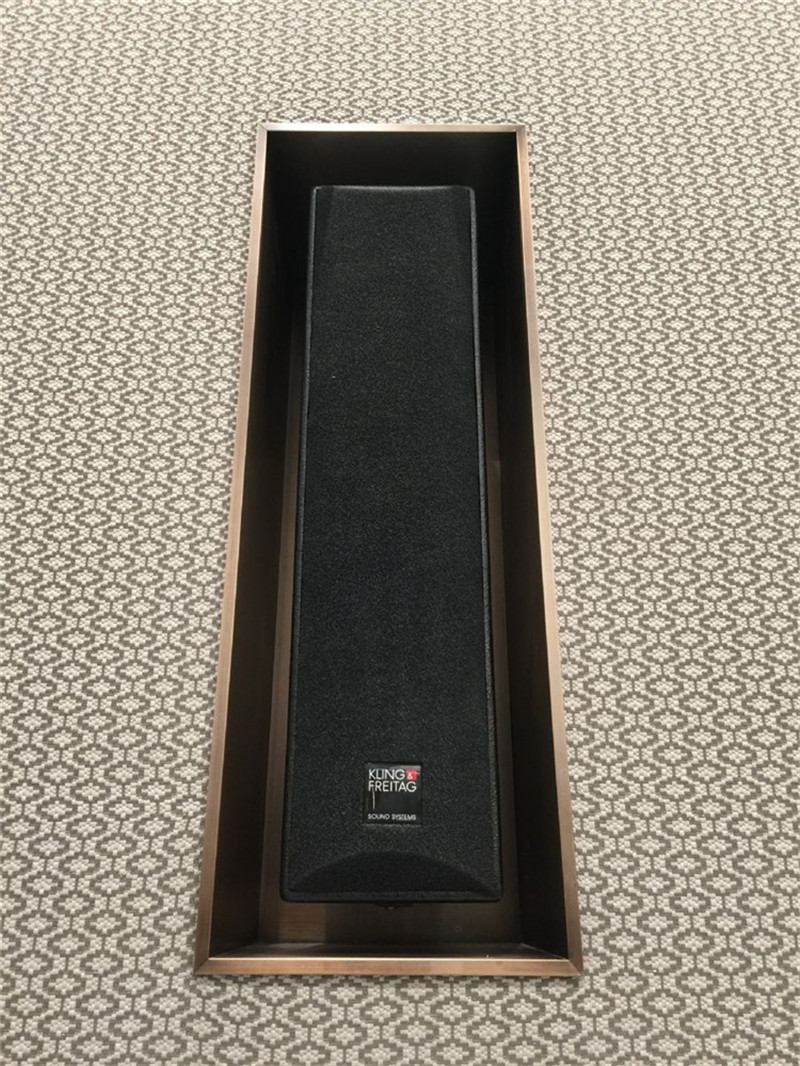 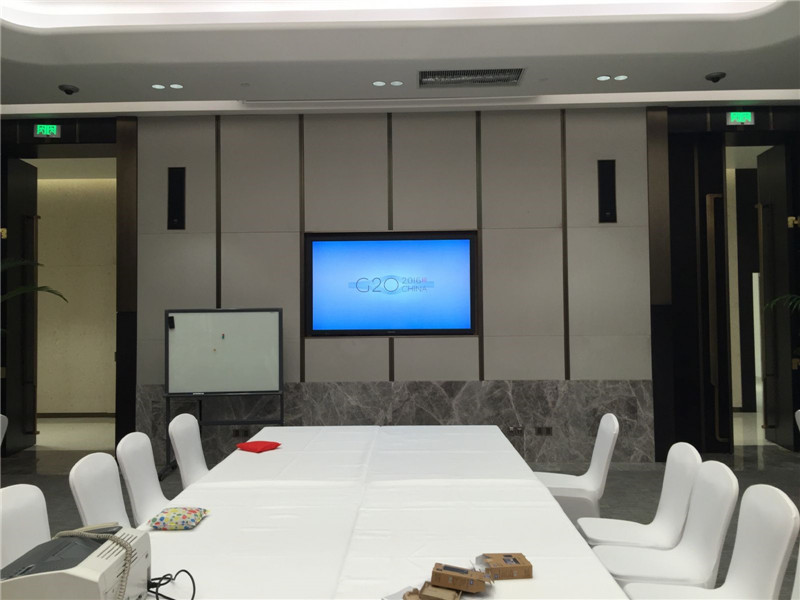 The summit of the participating countries, guest countries and representatives of international organizations on a number of key issues into the active discussion and communication. By the statistics, Hangzhou Summit is expected to reach nearly 30 major achievements, becoming the most fruitful summit ever. The KLING&FREITAG (K&F) speaker has become the most important way to transmit the voice of the participating leaders.